“Echolalia….Does Your Child Repeat Everything You Say?”

“Echolalia….Does Your Child Repeat Everything You Say?” 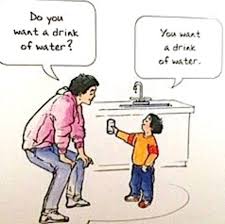 Echolalia is “echoing” or repeating what another person has said. When children are described as “echolalic” they can repeat words and phrases from prior activities instead of producing their own utterances independently. For instance, they can duplicate what they have heard in a movie or show, lyrics from a song, lines from books or what you say in everyday life.

Some parents may feel that their child may have a “more superior language” than they can naturally produce. For instance, a child who is displaying echolalia can imitate extended portions of a preferred movie or sing a complete song but cannot ask for water or answer a question from mom or dad when asked. Although the child can use many words he doesn’t seem to fully comprehend what he is saying instead he is mimicking words without being able to “use” them.

Echolalia can be a feature associated with children who have autism. It is believed that 85% of individuals with autism who are verbal display echolalia in some method, according to researchers. The good news is that echolalia is in fact a beneficial sign that children with autism can ultimately be taught how to use language to communicate.

With autistic children, echolalia appears with more frequency and typically lasts for a longer period of time versus children with standard developing language. A child with typical developing language can imitate some utterances from a preferred movie or song yet he won’t repeat the movie several times a day.

So how can parents help their child who displays echolalia? The crucial component is to model every word, phrase or sentence just the way your child should say it. This can become very difficult for some parents. Some ways to support your child with echolalia are:

First you need to limit asking the child so many questions or giving lots of directions and instead begin to model labels, comments, and requests. You should start saying things exactly the way you want your child to imitate it because he learns by repeating exactly what you say.

It is important to model language from your child’s point of view. Model the kind of words or phrases he can reproduce and comprehend. For instance, if he’s attempting to refuse an activity (like sharing toys) model “stop”, “mine”, “no thank you” or “don’t like it.” Some parents may not like the notion of coaching their child to use unpleasant words however it’s better than having the child scream, cry, get bit or hit or be the biter or hitter because they don’t’ know how else to express themselves.

Another suggestion, do not ask your child “do you want” type questions because most likely he will repeat requests starting with “do you want.” It is important to model what he should say if you already know his request. Like if he’s pointing to his milk this is your opportunity to model “I want milk.” With time and practice your child will eventually request “I want milk” versus “do you want milk?” wait until he imitates the phrase before giving it to him. If you are offering more than one choice avoid using “do you want ______ or _____?” Instead model the names of the object like “milk” “juice” and hold it out in front of your child one at a time while repeating the name of the item. Once your child reaches for one continue to say the name of the object until he repeats it back to you. Remember to be aware of your tone because they will also mimic your pitch (like excitement) or question intonation.

While echolalia can become frustrating for parents it is has positive sides like the ability of your child speaking instead of being silent! Children with echolalia also have amazing memory abilities and learning from predictable patterns will and should be used to aide your child learn to language appropriately.

7 Tips to Help Children With Autism Enjoy Fireworks this Summer